Everything You Need To Know About The FIRE Movement

We won’t waste your time here — let’s get right to it!

What is the FIRE Movement?

The FIRE Movement, which finds its roots in the 1992 book Your Money or Your Life, by Vicki Robin and Joe Dominguez, regained its momentum in the 2010s when millennials entered the corporate (and by extension the financial) markets.

The FIRE Movement propagates the idea that you must take steps to ensure you save money, gain financial independence, and retire early. Sounds like a dream, doesn’t it? A lot of people thought the same and were dismissive of the FIRE Movement. And while it started out as an almost militant concept that demanded you live below your means and save money to retire early (which is not at all what young investors today want), the core foundation of the concept — one that demands financial independence and freedom — remains more relevant today than it ever was.

Investors today want to save for short-term goals like travel and experiences just as much as (if not more than) they want to save for the long term. So, it is highly unlikely that they would consider giving up their lifestyle of today for tomorrow — because the present is as important as the future.

It is safe to say that a singular financial strategy cannot be applied universally to every individual. You have to consider your income, fixed expenses, taxes, unbudgeted expenses, and finally your short-term and long-term goals — and all those things are variable factors depending on the individual. So, the final goal of the FIRE Movement, which is to create financial independence through freedom and flexibility, is met by choosing from various methods of the FIRE Movement.

It is important to remember that while early retirement is a focus of the FIRE Movement (and may have been the main reason for the Movement to gain popularity, to begin with), it is not the only aim of this movement. Some people might want to save for a life event in 10 years’ time, some might be saving for a foreseeable expense in a year’s time, and some might be saving to retire in 30 years. So, to match these diverse demands of investors, the FIRE Movement has identified three key methods to help you make the right investments – 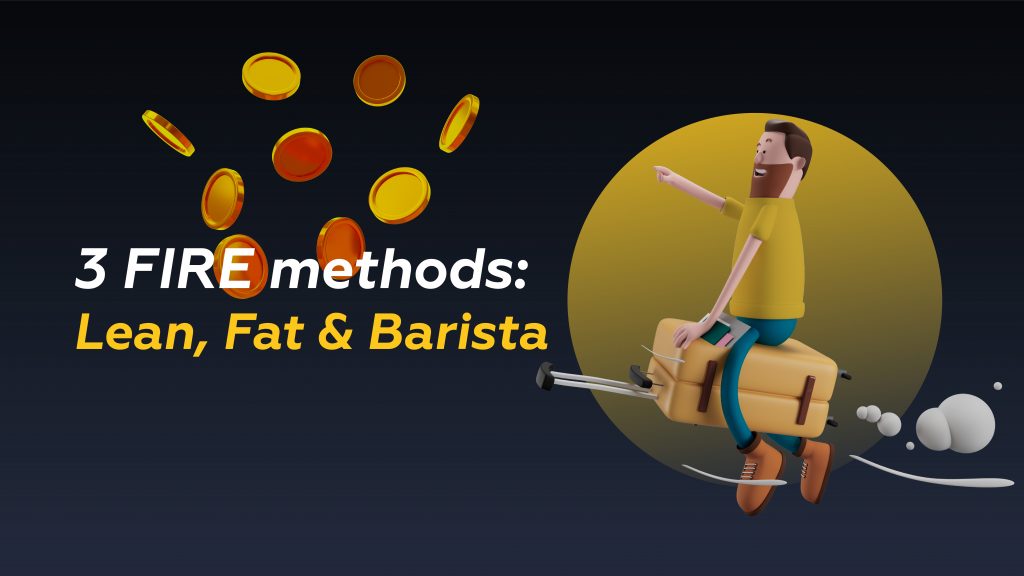 1.Lean FIRE — If you’re living a relatively modest life now and are looking to continue the same way after retirement, then the Lean FIRE method is for you. This method is one that will cover your basic needs. Reaching the Lean FIRE stage means that your investments have allowed you to save 25 times your yearly expenditure.

2. Fat FIRE — The Fat FIRE method requires more intense efforts on your part to save money and use it for investment opportunities than the Lean FIRE method. The investors who opt for Fat FIRE typically want to retire in comfort. They want some extra savings to make sure they can travel, shop, and have enough for important life milestones after retirement. If you are investing under the directive of this method, you are likely investing more aggressively now.

3. Barista FIRE — This method is for the investors whose investments are directed toward retiring from full-time work life and enjoying a work-life balance. This means your investments need to be making you some money! If you have reached the Barista FIRE stage, it is basically saying your savings and investments will cover your living expenses entirely. Barista FIRE is somewhat of a mid-point when it comes to practicing financial prudence in the present — while you may not need to be as strict with yourself as those investing under the Fat FIRE Movement, you need to definitely be stricter than those investing under the Lean FIRE Movement.

An important thing to remember is that the FIRE Movement is based on simple mathematical calculations. The amount you identify as your required nest egg depends on factors like your current and projected income over the years, the possible inflation in the economy, the price of things like property and medical care, and of course, your personal goals as well.

Retiring early requires meticulous planning, and more importantly, it requires you to start investing as soon as you start making money. The foundation of the financial movement is complemented by the fact that investing regularly and for as much time as you possibly can, will get you the most substantial returns in the long run.